One thing I hadn’t anticipated before having children was just how much space they take up! I’d heard friends complaining about the need for bigger houses or more room when their kids had come along and it didn’t make sense to me… Babies are small (well our 9 pounders aren’t small in the context of babies but babies as a concept are small!)… They take up half a square meter tops surely?? Well I was wrong because when you make the decision to bring a child into your home, you also invite a whole heap of crap into your home with them!!!
This crap comes in two categories…

Babies lure you into a false sense of security with their smallness… Oh look at them laying there all little and cute and tiny… Oh hang on… The arrival of this teeny, tiny bundle of cuteness seems to have brought with it a removal van full of brightly coloured, bulky, space stealing paraphernalia that would easily fill a 27 bedroom mansion!

The crib that has to find a space next to your bed which you will absolutely, 100%, definitely whack your knee on EVERY. BLOODY. TIME. you get out of bed in the middle of the night when you are sleep deprived. The bouncy chairs which you need to strategically place around the house in case you need to urgently put down a baby after its vomited all over you. The Pram which has no home other than the hallway where you have to attempt to shuffle past it each time you come into the house (which would have been a challenge with your pre-pregnancy waistline but is nigh on impossible now!). The car seat! The baby walker! The Moses basket! The highchairs! The microwave steam steriliser which is now in permanent residence on your worktop cluttering up your surfaces! Piles of nappies! Nappy bins! Bumbos! Play mats! Beanbags! Inflatable rings to sit in! Bouncers that hang down from your door frames, threatening to garrotte you every time you walk through! A partridge in a bloody pear tree! The list of stuff that they come with is endless.

The frustrating thing with all these things is that you spend all that money and find space in your house for them and then they stop using them after a few months! The bumbo is a prime example- all three of our kids were unable to use it as their thighs were too chunky so they got wedged inside it! We have definitely got better with each child at knowing what we actually need and what’s a waste of money but it’s taken us three kids to get to that point! You also start out with all these wonderful intentions of how you are going to keep all this stuff contained. You’ll definitely keep all the things in the babies room! You’ll definitely collapse the pram down and put it away in the garage each time you come in! You’ll definitely fold down the high chair and slot it in the gap behind the kitchen door when the babies not in it! What you don’t factor in however is that you’ll also be holding a baby when you attempt to do all these things so unless you are some kind of contortion artist or have an extra arm, you won’t! The good news is that as the baby grows, the amount of stuff they have does actually start to reduce and you begin to get some of your house back… the bad news is that there is something waiting in the wings to fill this void…

I reckon quite a few parents begin parenthood vowing that their kids will play with beautiful, bio degradable, entirely organic wooden toys. The same parents also have clear expectations of moderation and making sure that their kids don’t get ‘too much stuff’ in this world of consumerism and materialism! These parents are probably sat now resting their feet on a coffin sized toy box which is not just bursting at the seams but also has a large ‘overflow car park’ area on the carpet either side and in front of the box as well as precariously high pile of boxes of board games and jigsaws in the corner and random bit of stuff scattered liberally on every visible surface!

The toys are relentless! They are a complex and well connected series of plastic combatants who join together in a tactical invasion of your home! They sneak into places with such precision and stealth that you don’t even realise that they are there until you happen upon a photo of your home pre children and realise how much space you used to have!

Before having kids I wasn’t a particularly house proud person; there would always be a pile of things on the stairs that needed putting away and maybe a few stray bits of post on the kitchen worktop- but now… Now I fight a constant battle to keep on top of the war against the rise of plastic crap! There are days when I walk into our house and think ‘If we’d been burgled and ransacked, would I actually notice??’ I remember deciding to have a day at home not long after Esme was born- by 10am it was no longer possible to see the floor! Young children (at least ours) have an attention span of approximately 3 minutes on a good day- That means over the space of an hour they will have flitted between 20 different activities/toys. I used to attempt the ‘one thing away before the next thing comes out’ approach but the little whirlwinds are so fast, the floor is covered with lego, there’s play dough all over the table and the contents of your pan cupboard are all over the floor where they set up a make shift drum kit before you’ve had chance to mutter the instruction ‘tidy up’! 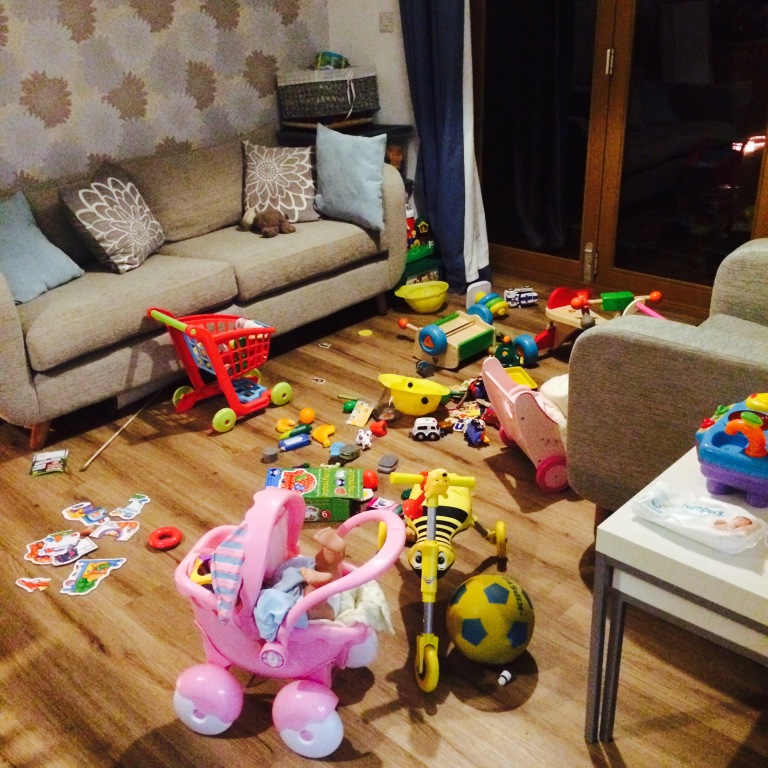 Toys are one thing- but my major war is against the ‘non-toy plastic crap’ invasion. Things that are not worthy of the title ‘toy’ but that appeal to children like sugar coated chocolate buttons! The innards of kinder eggs! The toys from happy meals! The stuff sellotaped to the front of ridiculously over priced magazines! Tiny pieces of flimsy, badly made, brightly coloured shite! Things that break within 3 seconds of opening and cause meltdowns of epic proportions! Things that I stand on and have to promise to ‘put somewhere safe’ and have to find ‘somewhere special’ to keep. Roughly once a month I go on a murderous rampage with a carrier bag once the kids are in bed and have a ‘plastic crap cull’ but it never lasts long, just around the corner are a whole heap of new bits of ‘stuff’ waiting to impale themselves in your feet and clutter your sideboard!

Then there’s the things they make! If you’re a diligent, sentimental, proper parent, you pain stakingly preserve these beautiful creations in scrap books and storage boxes in the loft so you can lovingly get them out once a year and reminisce about the time they painted a picture of a dog (brown blob of paint with four sticks!) or made a bridge (two cereal boxes with a piece of paper stuck over the top!) or drew a picture of mummy (with ‘a fat tummy and boobies next your legs’- thanks kids!). If like me you dread them walking out of the school gates clutching a ‘model’, you go with option B which is to display it somewhere briefly before sneaking it into the bin on a Monday night when they are in bed before the bin men come on Tuesday. Inevitably at some point you will get caught in this ultimate act of treachery; in my experience it is best to blame your husband or to invest in a cleaner who you can assign this mishap to!

There are cute little signs that you can buy to hang up… ‘please excuse the mess, my children are making memories!’ I try to remember this when I feel I’m on the wrong side of the battle against the Plastic Crap Revolution; but making memories or not, I still yearn for the day when I can walk through our house without standing on lego, impaling my foot on discarded Darth Vadars Light sabre or stubbing my toe on the Vtech baby walker! Making memories comes with a lot of crap! 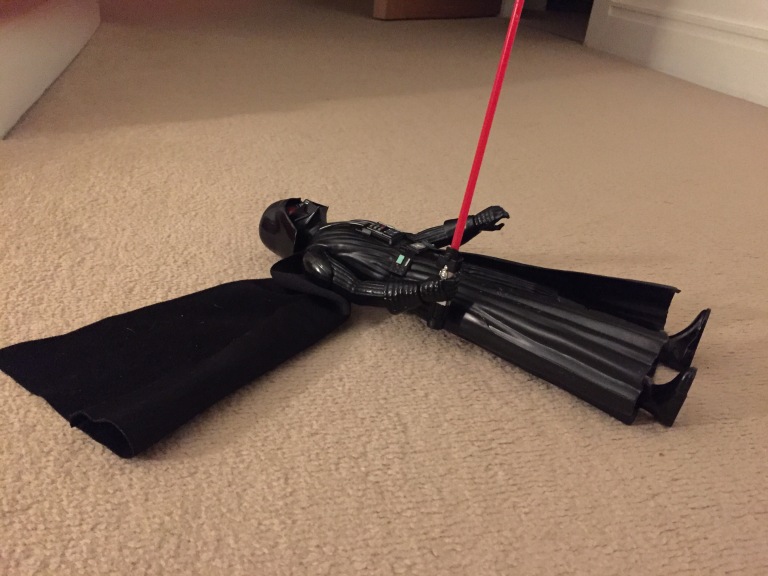 3 thoughts on “Clutter! The Pitter Patter of tiny feet… and a dumper truck full of other crap!”