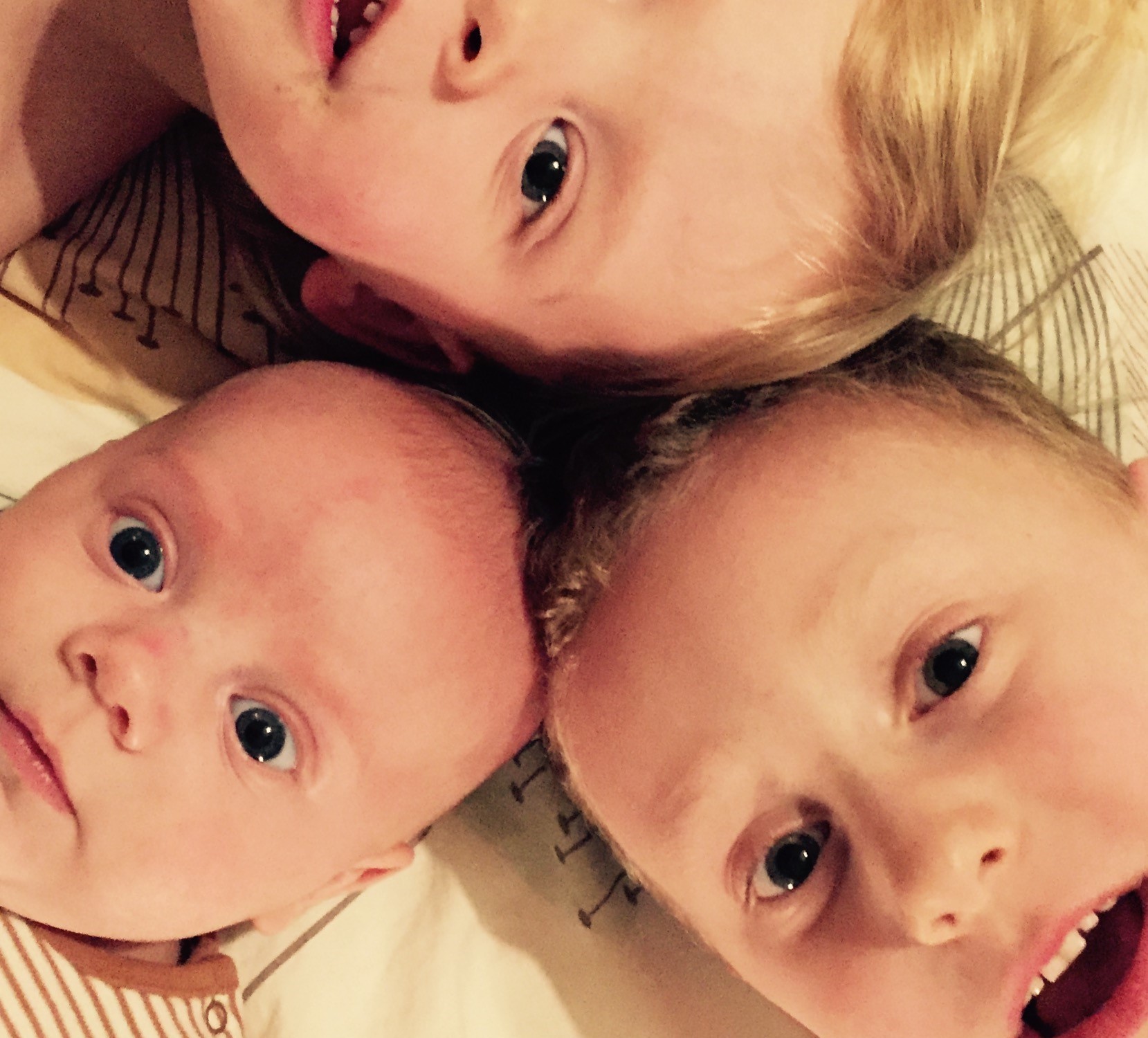 Someone asked me the other day how we had found the move from owning 2 small humans to owning 3! I hadn’t stopped to think about it really- I’m limited on time these days! Sitting around contemplating and thinking is normally exchanged for grabbing 40 winks or eating a hot meal! My general mentality towards life is to suck it up and get on with stuff so it hadn’t occurred to me that there was an option of not doing this, but after some soul searching and reflection… I think we’re doing ok! Admittedly though, my standards are set quite low; if we’ve got to the end of a day and all three children still have all their limbs and we haven’t been referred to social services then we’re #winning as far as I’m concerned!

The arrival of Ted had not been entirely anticipated and I have to admit to a couple of hours of hyperventilating when the blue line appeared in the window and it became clear we were going to be a family of 5! We had a 3 and 2 year old and they were pretty full on! How the hell were we going to be able to manage another in the mix? But at the minute, he seems to have slotted in quite well all things considered. He’s fab and very chilled out- I’m still trying to work out if this is just his nature and he’s naturally a very content baby or if it’s because the first two were basically practice runs and we now know what we’re doing!

The most difficult transition by far for us was going from 0-1! George came along and absolutely turned our world upside down! I know this sounds like a stupid thing to say, but we’d spent so long trying to get pregnant that I think I’d forgotten that this would mean there was a baby at the end of the process! It wasn’t that I hadn’t had experiences of babies- I am the oldest in my family and already had a nephew and lots of friends with children so it wasn’t like I hadn’t held or changed or cuddled babies. But when they cried or needed something, I gave them back to people who knew what they were doing! For the first few weeks I felt like I’d missed an important delivery note that explained how to stop the crying and how to take care of him- he would get unsettled and people would pass him back to me and I remember thinking ‘surely they should be giving this baby back to someone who knows what he needs?!’ I had a break through moment when he was about 4 weeks old when he started to cry on someone and when I took him back he stopped… It felt like a genuine eureka moment! We also weren’t prepared for the relentlessness of it all! Just finding time to have a shower seemed like an insurmountable task- I regularly got to 3 in the afternoon without having anything to eat or drink, just returning a text was tricky! And the lack of sleep almost killed me- I really struggle to function without sleep!

Looking back we made bloody hard work of it!!! George wasn’t a content baby- part of it was definitely that we didn’t know what we were doing but he was also big and hungry and colicky and I didn’t have a very good relationship with breast feeding for the first few weeks! It got better in the second month and we finally started to be able to do stuff again- by stuff I mean things like brushing my teeth- but I’ll never forget the beautiful difficulty of those first few weeks!

George was 18 and a half months old when Esme was born and that led to a fairly mental transition from 1 to 2! Doodle was a pretty content baby- she had to be as my hands were full running around after a full on boisterous toddling boy!! She slept lots on the early days, only usually got up once in the night, and was always quite happy to sit in a bouncy chair or highchair or walker and watch the madness unfold around her! She was much easier but the craziness of 2 did have lots of overwhelming moments! I remember going to the bank with them both and it being a complete nightmare- Esme screaming and George running riot for the whole time which put me off leaving the house again for a good few weeks! And there was definitely more than one tea time when I had to call in reinforcements because juggling a baby and a toddler and cooking a meal was all a step too far! It was bonkers but fun and we coped with the baby bit much better this time round.

Third time round, we’ve definitely hit the jackpot on the content baby front and Ted is fab. We too have refined our baby techniques and there are definite differences in the approaches taken to aspects of parenting when you compare baby 1, 2 and 3! Some examples below…

Baby #1: Run a soothing bath with lavender extract. Bath gurgling baby for 30 minutes before taking them out and performing baby massage with soothing whale music in the background. Read a minimum of 5 educational books which all contribute to their development in different ways. Turn on the comforting night light, wind up the mobile which projects non stimulating, soothing images on the ceiling, play a CD of white noise in the background and slowly retreat from the room, returning every time the baby so much as breathes to stroke his head and apologise for leaving them! Ensure that baby is asleep by no later than 7.30 to make sure they don’t become over tired!

Baby #2: Dunk baby briefly in the bath, trying to ensure that the toddler doesn’t accidentally push them under! Lay baby in their cot while you put toddler to bed- surely hearing a story read through a wall aimed at a much older child will mean they become a genius?? Eventually put the grumpy over tired baby in bed sometime around 9!

Baby #3: Bath baby only on nights where there is a discernible whiff! Forget about any kind of routine- they will fall asleep eventually- probably on top of you when you have collapsed in a heap on the sofa!

Baby #2: Anything that comes in an ‘Ella’s Kitchen’ foil pouch!

Baby #3: If God hadn’t wanted babies to eat chips and Cadburys chocolate fingers, he wouldn’t have made them in such convenient shapes for little chubby fingers!

Baby #3: Watching the older two do clubs and activities probably supports their own development by osmosis! And sitting at the side of a pool for swimming lessons in 45 degree heat is definitely good for building up their stamina!

Baby #1: Everything brand new! Spend hours on ‘Which’ researching the best prams/car seats/furniture. Top of the range electronic monitoring devices and an immaculately decorated nursery which comes together after spending months gathering images on pinterest! Every conceivable bit of baby paraphernalia purchased and stored, probably to never be used or used once! Politely turn down peoples kind offers of second hand equipment- everything needs to be just perfect for the new little poppet!

Baby #2: Use approximately 1/30 of the equipment that you used for baby number 1- all hand me downs! A hastily painted nursery with a mismatch of furniture, bedding and broken toys that the first one has grown out of!

Baby #3: If #3 was unexpected and you’d already got rid of all your baby stuff, buy some second hand stuff that someone is advertising on Facebook and dust off the random items of clothing you never got round to putting in a charity bag! All in, you should be entirely set up for your new arrival and have change from a tenner!

Baby #2: Plastic crap. Usually with flashing lights and loud beeping noises- most of these will be hand me downs from the first child when you lost the battle with grandparents over your ‘no plastic crap for Christmas’ policy! They are also likely to have parts missing and/or be broken!

Baby #1: Record ALL milestones with a minimum of 10 photographs, video evidence and carefully recorded notes in their red book and the milestones keepsake book someone bought you when the baby was born. Go to baby clinic each week to get them weighed and measured and to discuss achievement of aforementioned milestones with health visitors.

Baby #2: Note the ‘very significant’ milestones e.g. first steps, try to remember to get a picture on your phone but remember that your memory is still full from all the milestones that baby #1 achieved! Take baby to baby clinic every 2-3 months, usually triggered when you look through their book to compare weights with the first baby and you realise how long it is since you last had them done!

Baby #3: Notice that baby #3 has actually moved out and gone to University 2 years previously without any significant milestones being noted! Baby #3 will be weighed at birth and then possibly once more before they start school but only by getting on your bathroom scales holding your baby and then subtracting your own weight from the total!

Looking back at these, it’s probably the main reason why people don’t have more than 3- any more laid back and we’d be verging on dangerous!

And Ted, if you’re reading this in the future and considering starting therapy- either because I’ve made you feel deprived or because Daddy keeps telling everyone you were an accident, know this my darling… you have been my favourite baby! I wasn’t crippled with self-doubt like I was with George and I had some breathing space to enjoy you unlike Esme where I spent her first year running round trying to stop a toddler licking plug sockets! I have enjoyed (almost) every minute with you, knowing it was the last time I would be doing it made me stop and cherish you. I even loved the night feeds, feeling like we were the only people in the world awake and snuggling down with you and breathing in your new born smell!

I’m just hoping the transition stays as smooth when Ted can move!