The Sucky bits of Parenting Part 2.

I’m about to admit something which officially makes me a bad parent… in fact bad person!

I, Rachel Thornhill, don’t like playing make believe games with my children. There… I said it- I can’t bear the games where we have to pretend to be someone or something else or pretend to ‘go’ or ‘do’ something!

I do enjoy spending time with my children! Love it in fact! Will happily spend an hour sat on the floor doing a good jigsaw; we read endless stories; I love doing crafty things and having a good old paint; building stuff; baking stuff; even loves me a bit of play dough action! But role play games bore the bejesus out of me!

The thing is, there are only so many imaginary cups of tea and coffee that a girl can drink! I don’t mind the first three but after that I start to get a bit, well… bored! Kids seem to have boundless levels of energy for pretend food and drink making though- the usual ten second attention span goes right out the window when it comes to making imaginary tea/coffee/hot chocolate/sausage sandwiches. If only they would eat their own actual food with as much gusto as I’m expected to wolf down a feast of plastic peppers, chicken drumstick and (randomly) fennel (yes we did buy our plastic food from John Lewis, yes it also contain a ‘jar of stuffed olives’ and yes I know that is possibly the most middle class thing you’ve ever heard!)

The other one that drives me mad is ‘the mummy and daddy game’. ‘I know mummy- let’s play mummys and daddys’ is the phrase that fills me with dread. The games usually goes down like this…

Esme: Mummy you be the big sister and I’ll be the mummy.

Me: Why don’t I be the mummy and I’ll go into the kitchen and make a cup of tea.

Esme: No mummy you’re the big sister. It’s time to go. Hurry up and put your shoes on!

Me: I’m not putting my shoes on in the house.

*Loses will to argue/live, applies shoes, coat, hat, scarf and back pack while sitting in the living room in 22° heat and ‘goes to school’.*

The thing is with these games, nothing ever actually happens. We’ve spent whole afternoons playing Ms and Ds and the entire game involved ‘going to bed’ and then it ‘being morning time’ over and over and over again. (Morning time was of course signalled by the crowing of a rooster, which obviously they hear every day in the middle of Sheffield!) The only positive of this is that occasionally I get to lay down long enough for a quick power nap- I once came dangerously close to falling asleep properly and sleeping through the school run! Mind you if playing Mummies and Daddies mirrored real life, George and Esme would sit on either side of the sofa on separate laptops, occasionally looking up to decide what to watch next on Netflix while eating mini eggs!!

The current game of choice, which may be the most annoying yet, is the ‘going on holiday’ game! This involves ‘packing’ by taking a rucksack around the house and filling it with random stuff! When one back pack is full, they find alternative bags to stuff crap into! In no particular order, I have found egg cups, spoons, shopkins (don’t get me started on those bloody bits of plastic tat!), books, pants, shoes, millions of hair bobbles, my favourite earrings, and a packet of cheese! Jon thought he’d been a victim of an elaborate pick pocket attack the other day when he found his wallet devoid of the cash he was sure had previously been in there… turns out Esme had emptied the contents of his wallet into her backpack because ‘they needed pennies to buy stuff on the plane!’

So whilst I completely appreciate the benefits of role play games… I’ll continue to play through gritted teeth whilst checking social media on my phone and doing internet quizzes to see what my eye colour says about how many pets I should own! 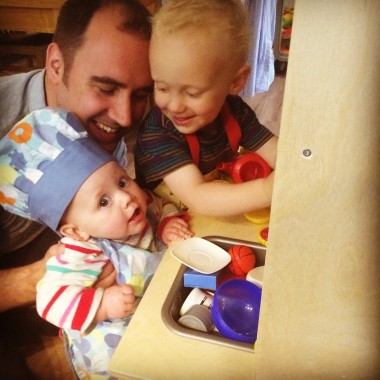