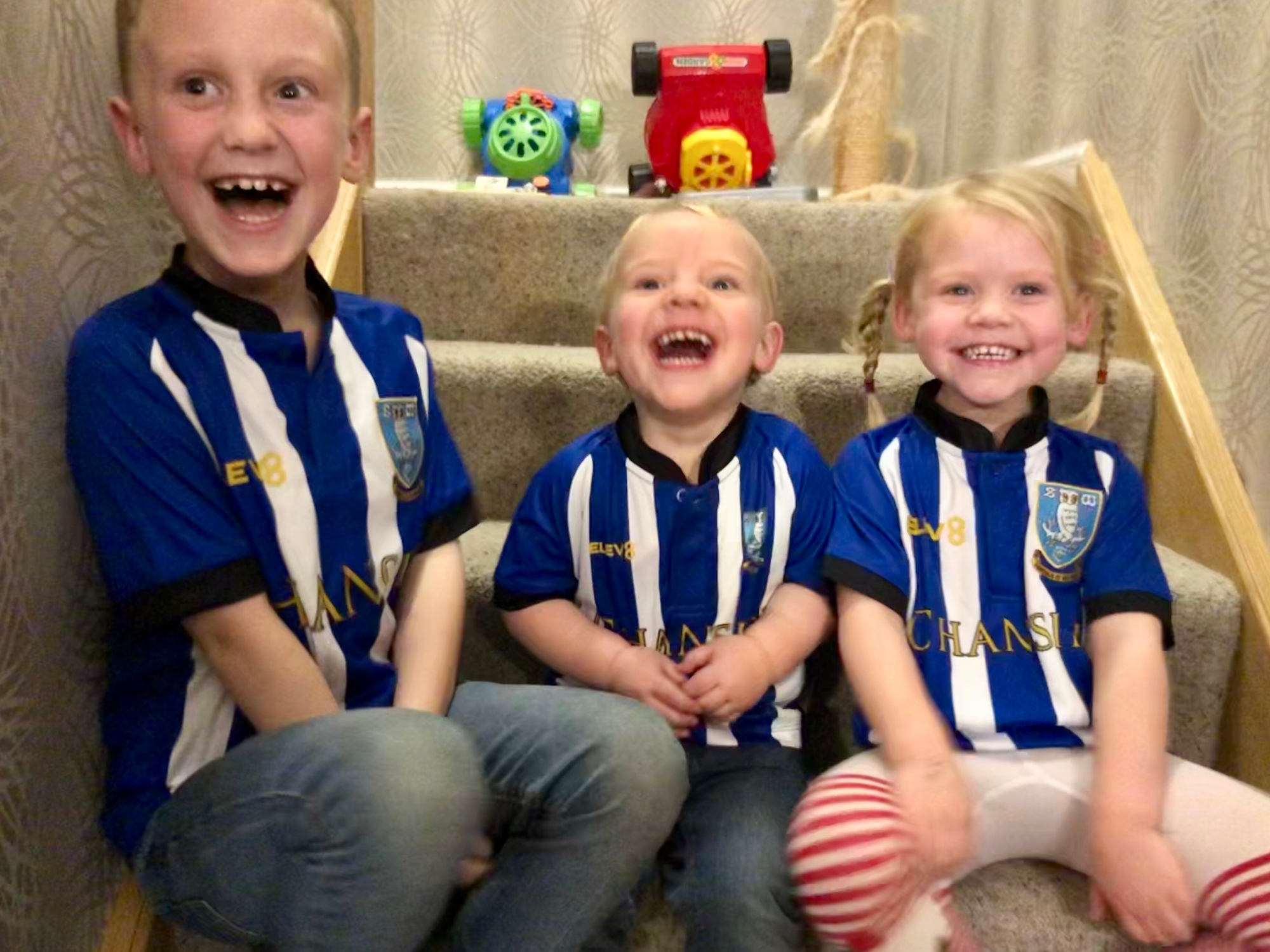 I was driving along the other day, listening to the usual bickering in the back of the car when I stole a glance in the rear view mirror. There, looking back at me, were our beautiful, high spirited offspring, George in the centre, flanked either side by Esme and Ted. It got me to thinking how different our lives could potentially have been…

I don’t mean if we’d decided to not have children at all! Oh no sir-EE! I couldn’t begin to imagine what life would be like without them; gallivanting to restaurants or the cinema whenever we fancied, holidaying in exotic places with choices based on our desire to see the world rather than where serves chicken nuggets, popping out on a whim with nothing more under my arm than a debit card, a key and the feeling of gay abandonment! As far as I’m concerned, a life where no one has a tantrum because their Wellies are too cold or you’ve asked them to do something completely unreasonable like get out of the bath, is no life at all!

No, this alternative universe pondering got me to thinking about what life would have been like if we’d had the other gender option each time. Instead of George, Esme and Ted staring back at me, I’d have been looking into the eyes of Isobel, Albert and Florence! I wonder if they’d have been more compliant? Or if somewhere in the world, Izzy, Albi and Florence are sat in the back of a people carrier somewhere and they DO eat vegetables, follow instructions and sleep at night and some other mummy accidentally got the children I ordered!

Names are funny old things aren’t they? As a teacher I found it really tricky to name children based on previous bad experiences of certain names. Jon suggested loads and got a straight out NO on many occasions because a ‘insert name of wayward child here- I’ll keep it generic so I don’t offend anyone!’ Had spat at me or kicked me or generally been a pain in every lesson I ever taught and so had ruined that name for me. He also got a range of no’s on the grounds that he made stupid suggestions! But if you think about it too hard, you would send yourself mad! We discounted some names on the grounds that they sounded good on children but not adults but that is actually ridiculous when you think about it! How many adults do you know that get turned down for serious jobs because their name doesn’t sound grown up enough?? ‘I’m sorry Poppy, I’m afraid you can’t be chancellor of the exchequer even though you have multiple honours degrees in economics because your name just doesn’t sound grown up enough!’ (I make my point with Poppy because I loved it and Jon discounted it on these grounds- Poppy Thornhill would have been super cute and had curly hair and worn party dresses with matching accessories!) I had a friend who turned down a name her husband suggested because when she put it with their surname and said it out loud, it ‘sounded fat!’ I do wonder whether there are certain traits that go with certain names (I have yet to meet a calm and compliant Esme, they all seem a bit wired for madness) but in reality, can a name really have that much of an impact on how a child turns out??

George was always our first choice for a boy. It was my grandfathers name and Jons family had connections to George’s too. It just seems like a solid and dependable name that will stand the test of time, and for the record, we totally picked it before Will and Kate! Our George was George first! They all have middle names after family members as that then felt like you were giving them a name for a purpose rather than just another random name added in. George has David after Jon’s dad. Our girl choice that time round was Isobel and I suspect she’d have become an Izzy. I’m not really sure why we discounted it when we had Esme as I still love it now.

With pregnancy number two we once again kept the gender a secret but were both pretty convinced it was another boy. I always saw myself with two girls, probably because I have a sister and am one of two girls myself, but after having George and also having a nephew in the mix, I genuinely couldn’t imagine a girl in the family! We spent hours and hours discussing boys names and found it really hard to agree. Jon liked Lucas but added to the George we already had and we had the potential to sound like Star Wars nuts! I liked Noah, he wasn’t sure. We’d settled on Albert or Arthur but I’m not sure we were 100% on any of the available options! The discussion about girls names had been brief! My sister had text me saying she’d heard Esme somewhere and what did I think… I liked it and forwarded it on to Jon who agreed it was nice! That was about as far as we got to discussing it! When our lovely midwife Alli held her up and announced that there were ‘no dangly bits on this one’ we were both that shocked that we couldn’t actually remember the name we’d decided on! It came flooding back to us and it was teamed up with Susan after my mum! I have to say I love her name- its unusual in the sense that there are not hundreds of them around but it’s not too quirky! It’s a pain to find anything with it written on though and she often gets cross in shops when the boys find their names on things and she’s left with ‘special girl’!!!

Pregnancy number 3 came and we seemed to forget to discuss names! We got to about a month before my due date and I had a massive hormonal meltdown that we had no idea what we were going to even call the baby which was indicative of how massively unprepared I felt to go from 2 to 3! In order to stop my irrational weeping, we vowed we would not leave the sofa that night until we had agreed on a girl and boy name! We even paused Netflix, such was the severity of my need for order! We decided on Edward for a boy with a view to shortening it to Ted and Florence for a girl. We almost went with Ruby but the middle name choice would have been Jon’s mum Anne and that would have given her the initials RAT and I have a phobia! To be fair, Florence Anne Thornhill wasn’t ideal either!

Ted is different to the others as his official name is different to what we actually call him but the others do have some variations; George is often Georgey or georgy T which in turn has become Teapot! He is incapable of having liquid in front of him without knocking it over so he’s going by a trial name of ‘spiller’ at the moment!! I’ve started shortening Esme to just Es or Essie sometimes although she told me the other day that she doesn’t like it so I’m trying to stop! She’s always had the nickname of doodle (I have no idea why!) and both boys have struggled to pronounce her name so she went by Me-Me when she was born and George was little and Ted now calls her Dee-Dee so she almost has as many names as she does personalities!!!

So I hope alternative universe Isobel, Albert and Florence are doing well and are happy and healthy! I still love the names we picked although I do sometimes wonder why we spent as long pondering them as we did… it’s not like they ever actually listen when you call them anyway! We may as well just numbered them 1-3!! X